NOPE – Few films can live up to the hype and buzz generated by a year-long blitz of online trailers, teasers, and marketing grenades.

Stars Wars: The Force Awakens an example of a film that actually did.

Suicide Squad? Well, let’s just say that all of those reports and rumors of studio panic and buyer’s remorse have now been proven warranted.

This film is a bona fide train wreck.

Writer-Director David Ayer, who showed so much promise with his gritty LAPD beat cop drama, End of Watch, and the WWII tank showdown, Fury, lays a monumental egg with this DC Comic book adaptation of bad guys with good hearts. 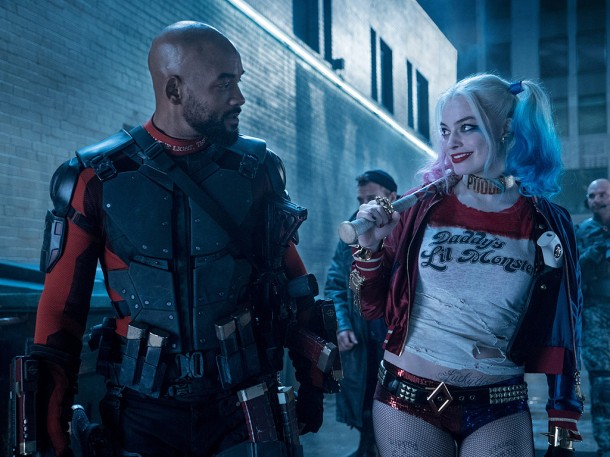 While a few of the cast manage to deliver a handful of watchable moments (Will Smith, Viola Davis, and Margot Robbie), the rest are real head scratchers. Most curious are Swedish actor, Joel Kinnaman, in way over his head as the security officer in charge of leading the “we’re the bad guys” squad on their mish mosh of a mission; and Aussie muttonhead, Jai Courtney, who plays Boomerang. Hard not to think this guy was cast exclusively because he is the spitting image of Mad Max’s Tom Hardy, and the filmmakers were hoping moviegoers would assume he was him.

The tone-deaf dialogue had many in our theatre laughing when they shouldn’t have been. The contrived back stories intended to make us care about the characters (did I mention they’re the “bad guys?”) are lazy and futile. The haphazard action is unimpressive and uninspired. And Jared Leto’s menacing Joker turn is wasted with a mere 11 minutes of screen time and no emotional impact.

In a year of lackluster cinema, Suicide Squad stands out as the biggest waste of your entertainment dollar.