YEP – Long gone are the days when I felt the need to mount a defense for why Tom Cruise is without question the greatest movie star of all time. Because it’s no longer up for debate.

Certainly not saying he’s the best actor of all time; although, he’s much better than his detractors will admit. Cruise is a major talent.

What I am saying is that ever since he slid across the hardwood in his underwear in Risky Business all the way back in 1983, he has maintained a commanding and ridiculously prolific box office presence the likes of which we’ve never seen before. I was about to write “…and are not likely to see again,” but then remembered heir apparent Leo is coming out with yet another wicked cool film in December, The Revenant; director Alejandro Gonzalez Innaritu’s follow-up to his Oscar-winning Birdman.  Cant’ wait!!! 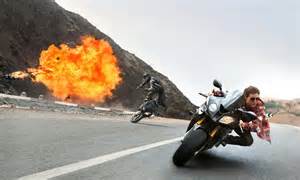 Mission: Impossible – Rogue Nation, written by Christopher McQuarrie (The Usual Suspects) and directed by J.J. Abrams, is a fun film with a decent enough story and an above average villain (Sean Harris). Back is the crew that surrounded Cruise’s Ethan Hunt in the last blockbuster of the franchise (Ghost Protocol, Jeremy Renner, Simon Pegg, Ving Rhames). They are all solid, even if Renner is somewhat wasted in a semi-bureaucratic role.

This time, though, a female agent capable of matching Cruise stunt for stunt is in the mix.

Rebecca Ferguson makes this film crackle. The Swedish born actress is physically up to the task, and her on-screen chemistry with Cruise is strong.

The car chase is slick. The motorcycle chase even slicker.

Most of the big action set pieces in the film work, save maybe for an absurd high wire, catwalk battle that takes place unnoticed above a sold out opera performance. Felt more like DePalma than Abrams, but…a minor complaint.

The good news is it seems highly likely we have not seen the last of Ferguson in this fast paced world of espionage, global terrorism, and double-crossing shenanigans.

The better news is it is certain Tom Cruise won’t be slowing down any time soon.

Hate on him if you must, but the guy is a force of nature.