YEP – “There is no such thing as a sure thing,” Jennifer Garner tells Kevin Costner as he labors over which collegiate star he should select with the number one overall pick in the NFL draft.

His dilemma: select everyone’s All-American blue chip quarterback who he was pressured in to trading three (count ’em three!!!) future first round picks for by a rival general manager; or select the intense linebacker he wanted before trading for the top pick, a ferocious competitor who plays the game for all the right reasons?

The ultimate question the film asks: does character count? 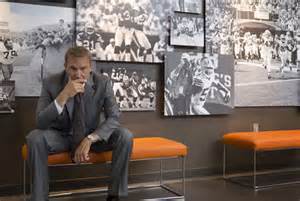 Say what you will about Costner, and I personally have not always been a big fan, especially in his younger leading man days, but he has consistently strived to attach himself to films with strong thematic depth.

From his Oscar-winning achievement in Dances With Wolves to Field of Dreams to Bull Durham to JFK to Tin Cup, he has stuck his chin out in an old-fashioned virtuous way to say “character does count.”

“Sometimes the correct path is the tortured one,” Garner tells him after he pulls the trigger.

With so many sordid and disturbing stories coming out of the world of sports, the theme of character, and the value placed on those who exemplify it, is not only timely, but poignant. You could almost say Draft Day is the perfect cautionary tale for professional sports executives.

The script does have its flaws, mostly in setting up the premise of the time clock ticking to represent the countdown urgency of Draft Day, then betraying that same urgency with some melodramatic side plots that works against it.

But, hey, this is an Ivan Reitman film, not a documentary.

And, while it may have hoped to be, it’s not quite Moneyball.

Still, Draft Day worked for me. My wife even liked it, and she prefers European futbol to our American grid iron smash mouth NFL action.

The filmmakers had complete cooperation from the NFL and it shows. The writers knew their subject and definitely love football – and that shows. Costner delivered vintage Costner. So there ya go.

Now, back to my fantasy football dilemma. Do I trade my number one pick for an elite receiver at half of my salary cap hit and roll the dice on a running back by committee game plan?

The clock is ticking!!!!