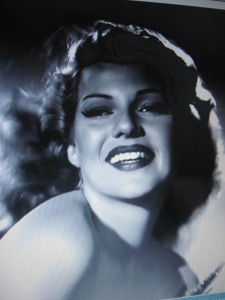 Once upon a time in the cinema directors and studios understood the power and prestige of the movie star’s first appearance on screen. Legendary director John Ford setting John Wayne against the canyon skyline in the monumental 1939 film Stagecoach announced to the moviegoing audience a star had arrived.

Rita Hayworth introducing herself to the world by popping her head up hair first into frame in the 1946 film noir gem Gilda. “Gilda, are you decent?” Pow! Doesn’t get much better than that.

Thankfully, some filmmakers still get the significance. Five-and-a-half minutes into the near flawless James Mangold 2007 western 3:10 to Yuma, Australian roughneck Russell Crowe lifts his eyes up from beneath his stylish Stetson and without saying a word, it’s “game on.” Christian Bale has much more screen time in Yuma. Russell Crowe is the film’s star.

Contrast that treatment to Ed Zwick’s Blood Diamond (2006).  Ten minutes into the violent and heartbreaking setup we see a small single engine plane landing precariously on a dirt runway in Africa, soon to be met by potentially hostile guerillas. But Zwick shortchanges his star’s entrance by inserting a two-shot in the cockpit with a brief exchange of unnecessary dialogue. The money shot was the mystery passenger stepping out of the plane from the gunmen’s POV, accompanied by a dramatic tilt up or focus pull to reveal the star. Leonard DiCaprio is as big a star as Hollywood currently has working, yet his director denied him the heroic entrance that solidifies a star’s standing with his public – and also makes for good storytelling. Strange, though, because Zwick fully utilized the power of the star entrance in his 1994 film Legends of the Fall. What woman could forget the sole rider approaching from the distance, golden sun surrounding his aura. Legends of the Fall announced the star arrival of Brad Pitt – and Zwick, with the assistance of cinematographer John Toll, threw him a bone.

Some storytelling devices are better off not ignored, and carving out a cinematic entrance for the star is bulletproof. Surprisingly, then, check out Ridley Scott’s new Robin Hood. Scott knew that the first still image of Crowe in Gladiator (2000) would bookend the stillness of the film’s fatal climax, yet he drops the ball in Robin Hood (2010) as we first meet our legendary title hero strolling out of the woods as if he just finished picking blueberries. Not very dramatic – or effective. Consequently, we are now playing catch up to be enlisted in the hero’s journey. Crowe won the Oscar for Gladiator, he won’t even be nominated for Robin Hood.

Even films with all-star casts like The Great Escape (1963) and The Towering Inferno (1974) make it clear who is doing the heavy lifting. In the beginning of The Great Escape we see clusters of prisoners climbing out of trucks but the movie doesn’t really begin until we see Steve McQueen walking alone along the barbed wire fencing, both foreshadowing and star entrance all rolled into one shot. Nice! In a film full of notable names and faces, McQueen was the star. The Towering Inferno begins with a helicopter landing on the roof of a skyscraper. We see the back of the passenger in the cockpit – the door opens and now we see the passenger to be none other than Paul Newman, old blue eyes. A big star in a film full of big stars making a big star entrance.

Go back and look at John Carpenter’s campy cult classic Escape From New York (1981). Everyone remembers Kurt Russell’s ‘Snake Plissken.’ We first meet ‘Snake’ in a shadowy corridor perp walk, kind of ho-hum considering most of the film lives in the shadows. What I found  amusing was that Carpenter lined up his star’s entrance for his villain. And I suppose when you have Lee Van Cleef (The Good, the Bad, and the Ugly, For a Few Dollars More), why not. Stretch limo rolls onto the tarmac, door opens mysteriously, out steps Van Cleef, one boot at a time. Pretty cool.

Brian DePalma, while wildly inconsistent as a filmmaker, knew that Al Pacino’s ‘Tony Montana’ needed a cinematic introduction. The interrogation scene where we first meet Pacino in Scarface (1983) opens on the back of one of the immigration officers as the camera does a slow pan off of the negative space on to…the star. And check out Rebecca Romijn-Stamos’ soft focus reflection on the tv screen in DePalma’s Femme Fatale (2004) – almost upstaged by the stars of the 50s noir classic Double Indemnity playing on the tv – but not quite as the camera pulls back to reveal her semi-nude pose on the bed, every inch the star of the story we are about to be told.

Why pay megastar Will Smith all that money to carry a film like I Am Legend (2007) only to nonchalantly introduce his character listlessly driving down a vacant post-apocalyptic street chasing deer? YouTube a look at Charlton Heston’s entrance in the 1971 cult classic Omega Man (inspiration for I Am Legend). Over the top? Definitely. Corny? Maybe. Worthy of a Hollywood star? Without a doubt.